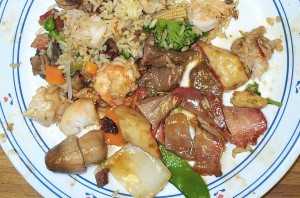 Australia is far enough from the rest of Asia to be largely unaffected by whatever happens in the continent, physically or economically. But, it is near enough to have meaningful cultural exchanges with its closest neighbours.

Australians and the rest of Asia might not have much in common, but they all like eating. Nothing smashed cultural barriers to bits quite like food. There are many Chinese restaurants in Brisbane, and many Australians are quickly incorporating the exotic menus into their regular diets.

UN on a Plate

The diversity in tastes is a drastic change from the Australian diet sixty years ago. Back then, almost every nation kept to themselves, and any interaction was met with suspicion and animosity. You can’t help it; they were all in the middle of a war. Sure, households still hold true to the meat and two veg tradition, but foreign food is definitely making inroads to winning over the locals. This is clearly the situation when it comes to Chinese cuisine.

Stir-fry is a quickly rising star in the country’s foreign favourites, and it’s nearing spag bol (spaghetti Bolognese) at the very top. People love it because it’s very easy to make.

The Chinese were not that significant in number in Australia at the tail end of the war, but you can bet every city had at least one Chinese restaurant. It doesn’t take much effort from that to become a mainstay in Australian cuisine.

Not Ready For Anything

Australians have a love-hate relationship with many Chinese dishes, depending on how exotic and difficult the meal is. For example, sweet and sour pork is an all-time favourite with children and adults alike. But, chicken feet is still a huge, unthinkable taboo in many Australian homes.
Food is the ultimate diplomat, and the more people eat, the more they understand each other.