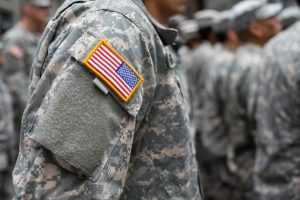 People in the armed forces may have been on missions that exposed them to life-threatening experiences. The panic and fear they feel while in those scenarios can still play out, long before they have gone home.

In 2015, only 10 percent of American armed forces saw combat, but the United States military had the highest rate of post-traumatic stress disorder in its history.

PTSD occurs after a person has gone through or witnessed a shocking and dangerous event or trauma. During the traumatic experience, people believe that their lives, as well as other people’s, are in danger. Sixty percent of men and half of women experience trauma at one point in their lives.

Veterans can have reoccurring experience of PTSD. Around 11 to 20 out of every 100 veterans who joined Operations Iraqi Freedom (OIF) and Enduring Freedom (OEF) have PTSD in a given year.

According to one veteran suffering from PTSD, he is usually vigilant, quick to react to strange noises, and as a result, do not sleep as deeply. The constant readiness to fight also gives him anxiety. He also suffers from flashbacks from his times in combat.

According to the U.S. Department of Veterans Affair, veterans with PTSD might suffer from other medical or mental health problems.

Osmond and Cockayne Associates believe that veterans should be able to claim benefits they deserve. Apart from benefits for those who suffered a physical injury during active duty, this is also applicable for people who have PTSD. Veterans who are eligible for VA Services can ask for PTSD treatment; many places within VA provide this.

Veterans have to suffer through PTSD even after their service, but with proper attention from professionals and the support of family, they can cope with it and slowly go back to their lives.