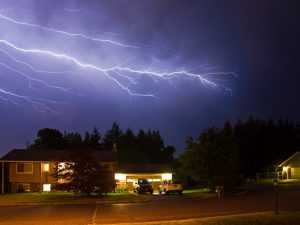 People say that lightning doesn’t strike the same place twice. That’s a welcome thought, for if it does strike twice, the damage would be almost incomprehensible. Even a single lightning strike is as powerful as anyone can imagine. A single strike would be enough to cripple electronic systems for a good length of time. Just ask Adam Tulloch and other electrical testing professionals.

The Real Deal With Lightning And Electronics

All electronic chips are extremely delicate. Even the smallest hints of static electricity could damage them beyond repair. Now, imagine a massive bolt of static electricity — all one billion volts’ worth of power in it — striking in close proximity or even directly. Literally, everything would be obliterated.

But it pays to be realistic. The probability of a direct lightning strike hitting rows of electronic equipment inside a building is extremely slim. The more grounded approach (pun intended) would be to examine what will happen if a lightning bolt strikes near a building. Say, the building’s location and the actual position of the strike are about a few hundred metres away. Would the bolt present damage to the electronic equipment?

How Does Damage Occur, And How To Protect Against It?

As you now know, lightning bolts are gigantic bursts of static electricity containing an insane amount of power. Electronic devices, unless unplugged and handheld, are susceptible to current surges if a lightning bolt strikes directly at or nearby power lines. The first line of defence would be a surge protector, but they can only do so much.

The best course of action is to stay vigilant. If there’s a thunderstorm warning in the area, unplug all electronic/electrical devices at once. Ideally, this should be done before the storm comes in. During the lightning storm, use of such equipment should be prohibited until the storm subsides.

Can Lightning-Damaged Equipment Be Repaired?

Lightning damage is hard to reverse. Power surges cause overload, which can destroy the most delicate parts in the blink of an eye. Provided that the surge is minimal, there might still be hope. But it’ll be best to hope for the worst and just accept the fact that a replacement is due.